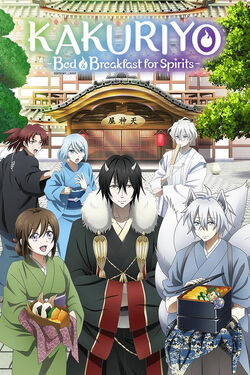 Kakuriyo no Yadomeshi (かくりよの宿飯, lit: Afterlife Inn Cooking), localized as Kakuriyo -Bed & Breakfast for Spirits- in English, is an anime television series adaption of the supernatural shoujo light novel series written by Midori Yūma and illustrated by Laruha. The anime series is directed by Yoshiko Okuda at Gonzo, with scripts handled by Tomoko Konparu, characters designs done by Yōko Satō, and music composed by Takurō Iga. The series was first announced in November 2017 and premiered April 2, 2018 on the Tokyo MX and BS Fuji stations. It will run for two cours for a total of 26 episodes. The DVD/Blu-ray release will consist of eight volumes with 3 episodes each and a ninth volume with 2 episodes. Both Crunchyroll and Funimation are currently streaming the series.

Female college student Aoi inherited her deceased grandfather's ability to see ayakashi. One day, while Aoi is feeding some ayakashi, a demon appears! He declares that Aoi's grandfather owed a great debt, and as compensation, Aoi must marry the demon! Aoi refuses, and decides to pay off the debt by working.

Add a photo to this gallery

Volume 7 Cover
Add a photo to this gallery

Blu-ray + Digital Part 2
Add a photo to this gallery

Retrieved from "https://kakuriyo.fandom.com/wiki/Kakuriyo_no_Yadomeshi_(Anime)?oldid=3380"
Community content is available under CC-BY-SA unless otherwise noted.